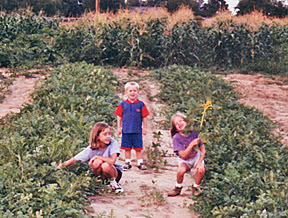 Continuing on from the last blog entry (see 2/13/12 blog), our family began its farming adventure at Whitener’s Greenhouses of Huntersville in 1998.  Dan and Linda Whitener graciously rented us an acre of farmland in order for us to try out our green thumbs.  The soil, rich with nutrients, produced rows and rows of tomatoes and squash, peppers and cucumbers.

Our children at that time were 7, 5, 3, and 1. Looking back, I can’t believe anything grew in that field with all those little feet running around. But our little farmers quickly learned not only to watch where they stepped, but also how to plant in a relatively straight line (HA!), how to determine what was a weed and what was a vegetable plant, and to experience the fun of working as a team while watering the garden. And then there was the joy of picking the vegetables and popping a sweet grape tomato right in the mouth. We did have a painful experience involving a jalapeno pepper being eaten right off the vine. One little boy was not happy that afternoon! 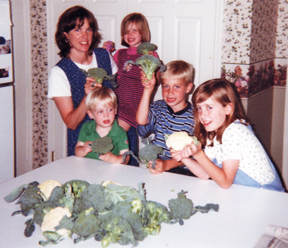 We tilled and planted and watered and picked at the Whiteners’ for a few years, but our children kept asking about farm animals. The dream of having our own land kept resurfacing. We had started an engineering business back in 1992 and it had grown to include 25 employees. We realized there was no way we could raise 4 children, run a successful/high stress engineering firm, and be part time farmers. In 1999, at the peak of the good economy we were getting offers to sell the business. After much thought and prayer, we decided to go ahead and sell it and “buy the farm”.

The search for our farm

So now we had the money …. the harder part was finding some land. At that time, I was homeschooling our children so one of the constraints with our search was that we couldn’t be too far away from our homeschooling support systems as well as Chris’ new job which, was based in Charlotte. That really limited how far we could move. For several months we searched in Iredell, Cabarrus, Lincoln and Gaston counties. Nothing seemed to fit our list of requirements. We’d gotten to the point of giving up or as least putting our search on the back burner, when one day Chris was driving around with our oldest daughter, Rebekah. They drove down a little country road in Huntersville and happened to spot a cleared property with a small house situated on a hill … and some sort of sign that was bend down near the driveway. After they pulled into the gravel drive, Rebekah picked up the sign to reveal it was a For Sale sign that had fallen down.

It turned out that the owner was in California and he was wondering why he hadn’t received any calls about his pristine piece of land. (Personally, I think angels were involved in hiding the sign.) The owner had originally bought the property in order to raise horses. He had built a 1-bedroom cottage and had only lived in it for a few months before he had to either move to California or lose his job. Needless to say, he moved and put his 23 acres and small cottage on the market.

A very special tract of land 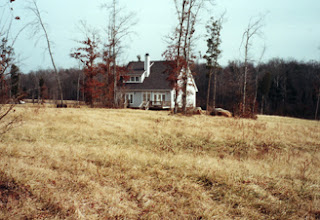 This beautiful piece of land also included the headwaters to Garr Creek, which runs into Mountain Island Lake. For those who don’t know, this is the creek that drains into Latta Plantation and is the closest drainage area to the intake for Charlotte’s drinking water. Catawba Lands Conservancy (CLC) wanted to buy that section of the property to preserve it from development and protect the headwaters of Charlotte’s primary drinking water source. The whole real estate and legal transaction with CLC, the home owner and our family would take about 10 more blogs and I don’t want to bore you to death, so I’ll cut right to the chase. We were able to work out a deal where our family bought 8 acres and the house, and CLC bought the other 14 acres with us at a reduced price.

So now we had 8 acres of land, a 1-bedroom cottage and a family of 6 that included 4 rapidly growing children. That called for a major expansion! We were up for the task of being pioneers in Huntersville as we worked to develop land, build fences and of course buy a bigger tractor and some farm animals. By tapping into Chris’ experience with construction, and with the help of many friends, we spent that year designing and building a 3,000-square-foot addition, a tractor shed and various outbuildings. By God’s grace and a lot of hard work, we moved into our newly renovated home in July of 2001. Now we were ready to really act like farmers including tending animals, mucking stalls and raising a big ol’ farm garden.

Ready at last to be farmers

Looking back it still amazes all of us at how much we accomplished in such a short time. Getting to the farm was just the first step of learning about how to raise crops and tend the animals. It’s an important step – especially since we did not grow up in farming families. We promise to get back to the basics of farming on small acreage next week. For now, I’m going to take a nap and recover from just thinking about all the things we did in the beginning of our farming saga. 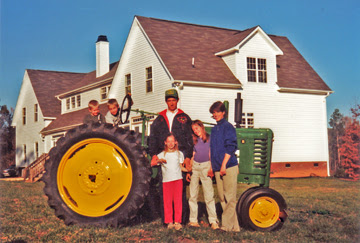 About the Author: Erin Hostetler